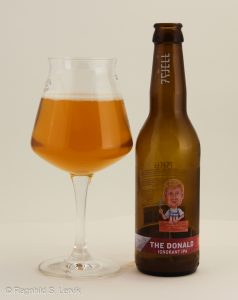 “The Donald – Ignorant IPA”. This is not a real IPA, and The Donald is not really presidential. They’re both pretty damn ignorant. US of A. The greatest country in the world. Potentially led by a loose cannon who only looks out for him self. Dictator in spe. Such a fucking disaster. Inherited wealth and bankrupcies en masse in his wake.

A narcissist who lives in a gold tower, want to build a wall between the US and Mexico, deport 11 million people, undermine NATO in the harshest political climate since the USSR collapsed, try to shame Gold Star families, bullying his way pretty damn near the White House, and the list goes on. Generally speaking; The Donald is not a very nice guy.

The beer “The Donald”, on the other hand, is very nice. It’s an awesome, light coloured, fruity pale ale. Not an IPA though. How ignorant.