It’s Ardbeg Day today. Ardbeg Perpeteuum is being launched it honour of the day, but since I’ve already published tasting notes for that, I had to find something else. So here’s a ten year old bottled in 2007 (which is what L7 means, in case you want to check the batch number markings on your Ardbeg bottle). 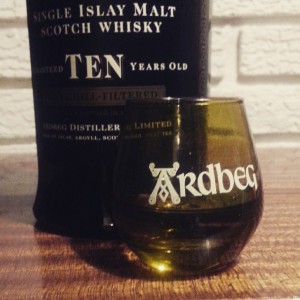 Palate: Bonfire, salty water and seashore. Something fruity behind it all. With water the fruit turns to unripe bananas.

Comments: The classic, and very, very good. 2007 is “old” Ardbeg. I need to get my hands on a recent ten years old to compare. 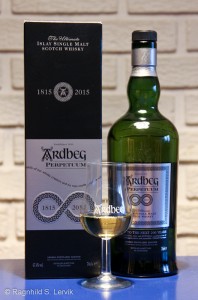 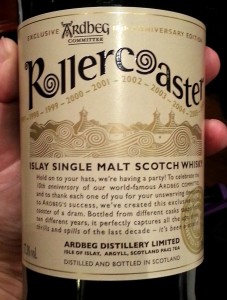 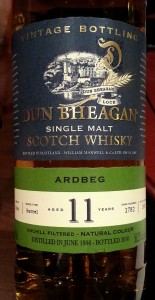 Nose: Clementine peel, especially the white part, quite sweet malt, grist (a lot of flour), leather sofas. With water the grist solidifies into whole barley and I get some lemon as well. 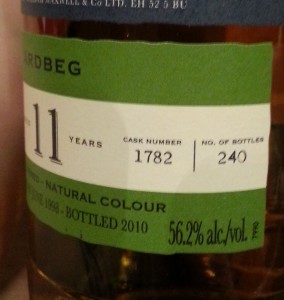 Comments: Though mostly a curiosity, I am left with my usual impression when it comes to newmake: They could bottle this and I’d gladly buy it. 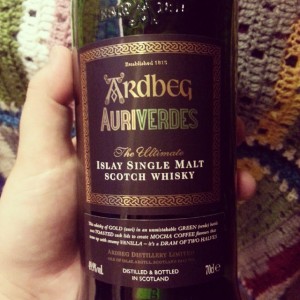 Nose: It smells like Ardbeg. Well, ok, smoke, a little banana, log cabin, a little varnish and some dark chocolate. Water brings out a bit of wax and rosemary and leaves a lot of smoke.

Palate: Smoky log cabin and dark chocolate. Cold rock on the finish. With water the smoke is still dominant, but I find some tropical fruits and a hint of menthol. A little bitterness develops on the finish, and I conclude I prefered it without water.

Comments: For a peathead this is obviously not bad, but it’s not exactly worth the asking price, either. You get smoke, and plenty of it, cheaper from other sources. The nose is best with a little water, the taste without. I will probably drink the rest of my share (I split the bottle with a couple of other people) without adding water.