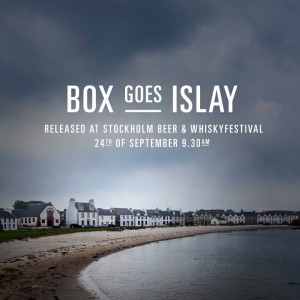 Myken: Ali Boston has been to Myken and paints a rather lovely picture.

Talking of Myken, would you like to own your very own cask of Myken spirits? Orders are now being taken for 40 litre casks, presumed to be mature just about the time the whisky comes of age. For more information contact Myken distillery (e-mail: post at mykendestilleri.no) or check out their pdf with more information (including explanations for the somewhat odd purchase processes that Norwegian regulation dictate) that I’ve shared via Google Docs.

Sweden: Box whisky released the third expression in their The Early Days Collection: The Explorer. 10,000 bottles were released at Systembolaget 5 June. Earlier this week there were still a few left, but they seem to be all gone now. We’ll be back with tasting notes soon, probably some time next week.

It’s not every day I come across news that signals the startup of a new Norwegian distillery. But in an article covering new leases and renewals in the Bryn and Helsfyr area of Oslo I came across the following sentence:

Translated: In the same building Oslo Craft Distillery (trademark has been registered in the EU) will build a new distillery covering 424 square meters starting January 2015.

The man behind it is Marius Vestnes founder of Cask Norway and Cask Sweden (importers of alcoholic beverages in Norway and Sweden), a man well known for good taste in alcoholic goods.

Not much more is know at the time of writing, but we will come back with news when they emerge.

Sweden: On the 20th of November Smögen whisky will release two bottlings at Systembolaget. One – Smögen single cask 20/2011 – is a single cask ex Maker’s Mark cask bottling, bottled at 60.9%. 295 bottles of 500 ml will be made available. The second bottling – Smögen Sherry Project 1:1 – has been finished in sherry casks, is bottled at 52% and 595 bottles of 500 ml wil be made available. The latter is listed as “övrig sprit” (other spirits) rather than whisky for some reason, though Smögen say it was filled in casks in July 2011 and bottled in September 2014, which makes it three years old by a healthy margin. Whiskyblogg.se has tasting notes for the single cask and Whisky Saga for the Sherry Project.

Sweden: Also on release at Systembolaget in November is Box The Challenger, at 48.2%. The date for this bottling is the 27th, and a pre-release was held at various Swedish pubs on the 13th.

I will be ready to order on the 27th myself, the jury is still out on the 20th, but I have to admit it’s tempting.

Myken: Myken posted pictures of their stills ready to ship from Spain on Facebook this week. The stills are looking good, and progress is also being made on the buildings at Myken. Follow their Facebook page to get news as they happen and see more pictures.

Since they have three stills on the way, of 300, 700 and 1000 liters capacity, I had to ask if they are planning on triple destillaton, but they are not. The smallest still is intended for gin production and possibly some experimentation. The whisky stills will therefore be a wash still of 1000 liters and a spirit still of 700 liters.

Times are exciting when it comes to Nordic whisky. This series of blog posts (in English) will sum up some of the most important news on the subject. Looking for news in Norwegian? See Nyheter.

Sweden: Two Swedish distilleries launched exciting expressions in Systembolaget’s June release on the 5th. Spirit of Hven released a single cask bottling, Sankt Ibb, fat 11-217, distilled from barley grown just outside the distillery. With only 273 bottles available, it was gone before you could blink. More interesting, as far as I’m concerned, Box launched their first whisky bottling (their earlier releases have been less than three years old). Box Pioneer was available in a batch of 5000 bottles, with a maximum order per person of 2 bottles, but even so, it was all gone by the end of the first day. I have two bottles waiting for me, and will publish tasting notes in due time.

Sweden: Talking about Box, the distillery has its own mini-festival, and it’s taking place on the 28th of June. Box Whiskyfestival features loads of masterclasses, a chance to tour the distillery, food and drink at the bar, including a festival beer, several whisky importers with their wares and live music.

Norway: The news of a planned distillery at Myken, north of the Arctic Circle, has garnered interest worldwide. Among others: Canadian Eye on the Arctic, Barents Observer and The Spirits Business. The distillery plans are part of a greater initiative to breathe new life into the community of Myken, The Myken Project. If this sparks your interest, there is a Kickstarter project in search of funding to make a documentary about the whole thing.