Batch Bav 2, bottle number 840. This aquavite has been cask matured both before and after distillation in Spirit of Hven’s potstills, which, according to them, gives it more depth. 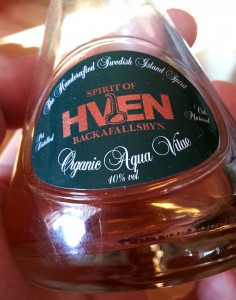 Nose: Smells more like Underberg than aquavite. Very herby and a lot of sweet herbs, too. Rosemary, basil and cumin. Hints of toffee and coffee sweets. The oak is also quite evident.

Palate: Cumin and lemon, but also sweetness. Dry hay. Salt on the finish.

Comments: Quite original, and quite nice, but lacks a little balance. It’s a bit all over the place, especially on the nose. Still, not a bad dram.

Times are exciting when it comes to Nordic whisky. This series of blog posts (in English) will sum up some of the most important news on the subject. Looking for news in Norwegian? See Nyheter.

Sweden: Two Swedish distilleries launched exciting expressions in Systembolaget’s June release on the 5th. Spirit of Hven released a single cask bottling, Sankt Ibb, fat 11-217, distilled from barley grown just outside the distillery. With only 273 bottles available, it was gone before you could blink. More interesting, as far as I’m concerned, Box launched their first whisky bottling (their earlier releases have been less than three years old). Box Pioneer was available in a batch of 5000 bottles, with a maximum order per person of 2 bottles, but even so, it was all gone by the end of the first day. I have two bottles waiting for me, and will publish tasting notes in due time.

Sweden: Talking about Box, the distillery has its own mini-festival, and it’s taking place on the 28th of June. Box Whiskyfestival features loads of masterclasses, a chance to tour the distillery, food and drink at the bar, including a festival beer, several whisky importers with their wares and live music.

Norway: The news of a planned distillery at Myken, north of the Arctic Circle, has garnered interest worldwide. Among others: Canadian Eye on the Arctic, Barents Observer and The Spirits Business. The distillery plans are part of a greater initiative to breathe new life into the community of Myken, The Myken Project. If this sparks your interest, there is a Kickstarter project in search of funding to make a documentary about the whole thing.