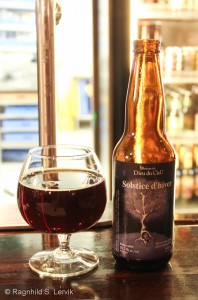 Palate: Coffee, creme brulee and cognac. Dessert, coffee and avec all together i a glass.

Comments: This should probably be drunk after dinner rather than before, as I did, but it’s hard to regret drinking something this good. Highly recommended.

Consumed at The Bishops Arms, Östersund.

It’s not often a new beer pops up in Norway that has no hits on the interwebz. This is such a beer.

Innis & Gunn are famous for their wood matured and cask matured beers and this newest one is no different. It’s matured over Bourbon-infused American oak heartwood for a full and rich bourbon flavour. So let’s see if it’s true. 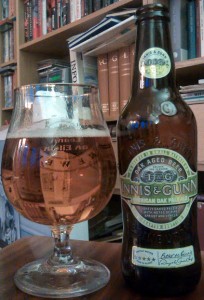 Nose: Vanilla and oak, in other words bourbon. A hint of fresh green apples is also present.

Palate: Light almost a bit watery start. But the bourbon flavours come out in force as we go along. The green apples still linger in the back. The bourbon lingers on and stay on the palate for a long time.

Summary: If you don’t like bourbon, stay away. It’s refreshing and a bit different, but the bourbon flavours are a little bit overpowering for me.

Drikkelig.no has been on a tour of Sweden this summer, well, parts of Sweden, anyway, and we’ve visited several interesting places. First stop: Jämtlands Bryggeri. They normally don’t offer tours during the summer, since there are fewer people at work (even – or perhaps especially – people who make good beer need a summer vacation), but since there were only two of us, we got an appointment anyway.

When you arrive at Jämtlands it might be useful to know that what looks like the main entrance is on the opposite side to where they want guests to announce their arrival.

Håkan received us in his very becoming “Hell”-t-shirt. Come to think of it every employee we met had some variety of Hell design on their t-shirt. Does this mean it’s the only beer Jämtlands promotes on t-shirts or does it say something about the employees’ preference?

We were first shown the malt store. Jämtlands purchase their malt from England, specifically from Thomas Fawcett. They buy 500 kilos bags of the base malts and 25 kilos bags of the more specialised malt types. They use 800 kilos per batch, so they get through quite a few bags in a week. Hops they source from whereever they can get the right sort, though they hardly ever use American hops. Currently they get a lot of hops from Bulgaria. If you’ve had a few of Jämtlands beers, you will know that they are not taking part in the the-hoppier-the-better race, but some hops are neccessary nonetheless.

We were then introduced to the mash tun and the boiling vessel. They boil for an hour and a half for dark beers, a bit longer for light beers. The most notable feature is perhaps the external electrical heater for the worts, the vessel is not directly heated.

The brewery has recently expanded, and in the fermentation room there are now nine fermentation tanks, each holding 5000 liters. The oldest tanks were the shiniest, of an English make, the new tanks were of a duller finish, and are from Hungary. Lager, Steamer and Ale are fermented at 15, 17 and 21 degrees respectively and it takes from 5 down to 3 days.

At the time of our visit they are brewing at the rate of one 5000 liter batch a day. The mash tun is a bottleneck in the production line and they are pondering whether to procure another one to enable further expansion.

After the recent expansion they now have 11 storage vessels. Håkan tells us that in the pre-Christmas rush they manage with nine days from mash to bottle, but the rest of the year the beer is given a little more time.

Once the beer is ready to be bottled it is filtered through cellulose filters, which takes about two hours for a 5000 liter brew.

The bottling plant is also pretty recent, it was installed about a year ago. The greatest improvement on the old plant is the lift which lifts a whole “layer” of bottles off the pallet. They used to have to feed the machinery manually. The only manual task left now is lifting the crates off at the end and stacking them for shipment. One batch fills approximately 7300 bottles, and they are all shipped off to Östersund immediately.

For non-Swedes the most interesting piece of information Håkan gave us is that they are currently considering changing bottle size from the current 0.5 liters to 0.33 liters. In order to do so they would have to change large parts of the bottling plant, so we’re looking at at least a year befor anything happens, but the crucial point is that if they make the switch they can start exporting their beers. The bottles they are currently using are part of the Swedish bottle return system and it is consequently illegal to use them for export (it’s useful to note this, by the way. Even though the bottles are not marked with the return mark you can return them in most supermarkets and get your deposit back). If they switch they will switch completely, they do not feel it’s worth the trouble to have two bottle sizes.

On the second floor they have a reception area where they have all their diplomas on display. It’s an impressive display, even if Håkan admits that the number of awards have dwindled once the microbrewery boom took off. They also have a bar made from an old pan from Till Bryggerier in Umeå, and they can receive parties here for tastings. Food can also be arranged as they have a roof-top terrace with a barbeque. I must suggest it for our next kick-off at work.

Nøgne Ø is getting better and better distribution in Norway after being taken over by the Hansa-Borg group. Even my local grocery store (quite small) has a decent selection of their max 4.7% abv. beers. Amongst them is the lastest offering Asian Pale Ale – a light refreshing ale with generous amounts of lemongrass (end quote).

It should be said that I’m no great fan of lemongrass and might be slightly biased when it comes to reviewing this ale. 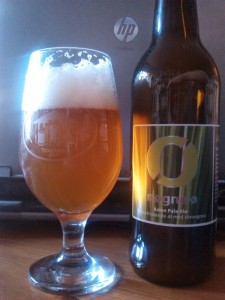 Nose: Fresh sitrus with a dash og malted barley and some wheat. The lemongrass is present without making a nuisance of itself.

Palate: Light, watery taste of lemongrass soup with some malted cereals. A slight bitterness hiding in the background acting all shy.

In summary: I won’t be purchasing this ale again, but I can see it  going well with sushi and lighter asian foods. Or as a thirst quencher for those who aren’t biased against lemongrass. 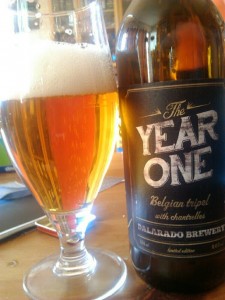