Exactly two weeks ago I was at Myken to take part in the official opening ceremony for the distillery. It was an experience of a life-time, and it was clear that not only do the Myken gang “with freids” have a star-studded tea, but even the weather gods are rooting for Myken. Brilliant sunshine and blue skies are hardly something you can bank on in this country, but that’s what met us on arrival last Tuesday.

It’s possible to note with a smile that the weather gods had a role to play earlier in Myken’s history as well, as it was when they became stuck on the island through bad weather that Roar and Trude – to of the main forces behind the distillery – fell in love with Myken.

I arrived back home after 36 hours with close on 600 pictures and life-long memories, and whether you want me to or not I will be sharing some of them over the next few weeks. Let’s start with the most important part: A tour of the distillery.

Even though the distillery building is fairly anonymous compared to other disitilleries, it’s not exactly hard to find. Myken is not big. In fact, all distances logged on the local signpost are measured in meters, and the number of buildings overall is limited. As the old, temporary signage for the distillery has now been replaced by a new sign with Metric Designs shiny new logo design, it’s even easier to find the right building. It used to be a processing plant for fish, now it contains Myken Distillery on the ground floor and Bruket bord & bar, a restaurant, above it.

The most important question coming to mind when you see Myken and are told that they distill whisky there should be: “But where do they get their water from?” The answer is a desalting plant which produces clean, clear drinking water from sea water.

Myken Distillery is a microdistillery and will remain so in the foreseeable future. Most of the processes are unusually dependent on manual input, and the equipent is hardly in the same league as the big players in Scotland. The mashtun is a repurposed plastic tank with an added mesh bottom, the washbacks are old milk tanks, which are available to purchase for the not-so-princely sum of 1 NOK per liter capacity. In fact it’s substantially more expensive to transport them to Myken than to purchase them in the first place.

The stills are new and purpose built from copper, but with a somewhat unfamiliar shape if you are used to Scottish stills. This is because they are made in Spain by Hoga Stills Co. The possibility of purchasing stills from Scotland was investigated, but new stills from Forsyth’s would not only have been about five times more expensive, they also had an expected delivery date in couple of years time. As Hoga could deliver within a few months, the choice was made simple for our eager distiller-wannabees. The stills are fired with gas, through gas-powered paella-pans, also from Spain, naturally.

The first spirit was distilled at Myken in December 2014, and throughout 2015 they’ve kept up a steady pace, heading for a total production this year of 5,000 liters. With the equipment thay now have, they expect to be able to increase annual output to a maximum of 15,000 liters over the next few years. In addition they are contemplating investing in another pair of stills, which would put the total capacity at 30,000 liters. Note: Numbers are for actual liters put into cask, not pure alchohol.

Despite the manual processes (and technical challenges) the method should be familiar to anyone familiar with Scottish distilleries. The malt has so far come from Weyermann in Germany, and up until two months ago the 125 kilos Myken use per mash were milled on what can only be descriped as a home brewer’s mill (though powered by drill, not hand cranked). A somewhat more industrial version is now in place. The mashtun, as mentioned, is a converted plastic tank. About 700 liters of worts is produced per mash, with 500 liters of water going in at 64-65° C and then a second water of 200 liters at 80° C. The wort is transported to the washbacks by the simple expedient of lifting the whole mashtun with a forklift and transporting it to the washback so the worts can drain off straight in. Up until two months ago, things were not so simple and the worts had to be carried by hand in ten litre buckets from the mashtun to the washback…

Myken use dry distillers yeast and the wash is left to ferment on average 3-4 days, but sometimes over a week if that’s what fits the schedule. The resulting wash ends at around 7% abv. 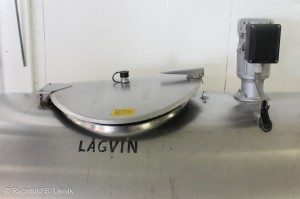 So 400 liters of low wine are distilled, the head, heart and tail are collected in metal buckets and poured, very manually, into the correct receptacle. Roar told us that the steps up to the spirit receiver were useful in filling the function “time to consider whether this is the correct tank”, since, should someone pour head or tail in there the whole batch would be ruined. Of course it could be redistilled, but then you’d have triple distilled spirits, and something quite unlike the rest of the production. No one has so far made that mistake. After all that they are left with around 100 liters of newmake.

When they have collected sufficient amounts of newmake it is filled into casks. For experimental purposes they have a variety of miniature casks of five to ten liters to get an early indication of how the spirit is likely to mature. If you’ve been to a whisky festival and had Myken spirit with some colour to it, it will have been from one of these. With so much wood to spirit interaction we are talking weeks rather than months or years for the spirit to “mature”. It’s not the same as a ten year maturation in proper casks, of course, or we’d likely see retailers’ shelves bulging with “speed matured whisky”, but it does give an indication of how various wood types will interact with the distinct Myken spirit..

Most of the production goes into ex bourbon barrels (most of them have been fro Maker’s Mark, lately from Wild Turkey), and some goes into 40 liter casks rebuilt from barrels by Thorslund cooperage in Sweden. These smaller casks are open to investors, so if you like you can own your own special Myken cask, if you want more details I published those a while ago.

More pictures to been seen on Flickr: Myken distillery.