This edition of Preludium is from Mackmyra’s smoked newmake variety that has matured in ex sherry casks.

Palate: Liquorice and a slight smokiness, but also a somewhat woolly, murky “chemical” feel. With water the liquorice is still present, but also raisins and some congeners.

Comments: This is probably the best Preludium I’ve tasted, though that is not neccessarily saying much as my impression of the series as a whole is not very good (though I AM a fan of much of what Mackmyra has released in later years). Smoke and sherry does a lot to conceal any off-notes, so that even though this also has a “young and unfinished” feel, it’s far from undrinkable.

Nose: Cold smoke and brick, malt and barbeque. With water it turns fruitier, but there’s smoke hanging over the whole.

Comments: Nice, but a little one-dimensional. Best without water.

Mackmyra Midvinter has been finished in Bordeaux casks, glühwine casks and sherry casks. Which leads me to expect mulled wine, really. We’ll see.

Nose: It definitely smells of herbs, and herb schnaps. Not quite Underberg, rather a sweeter version. Sweetness and Christmas spices, and a hint of toothpaste. There’s this odd (to me) toothpaste variety with cinnamon flavour; that’s what this smells like! More of that with water. With a lot of water some fresh fruit emerges, pears, perhaps?

Palate: Toothpaste with cinnamon flavour is a pretty accurate description of the palate as well. Cloves and other Christmas spices also appear. Bitterness, oak and cloves on the finish. Water makes no noticeable difference.

Comments: This is just plain weird. It’s not unpleasant as such, but it’s not “whisky”, and not quite good enough to convince me not to care.

In contrast with the last couple of Mackmyras this one is not “förlagrad” (pre-matured). When the cask was filled on 28 May 2007 and the bottle filled on 15 November 2011 we’re talking about a straigh forward four year old whisky. On the other hand, it’s been matured in a 30 litre ex-sherry cask, which should give it a lot more cask influence than a four-year-old from a full size cask.

Nose: Red berries, dried cranberries, vanilla and something port-like. With water it acquires a hint of liquorice, but also more fruit.

Palate: Sherry, and raisins with a hint of cardboard. With water the cardboard transforms into bread dough, other than that the main impression is “sherry”.

Comments: Decent, but nothing more. Better on the nose than the palate.

So here’s another variety of the “förlagrad” (pre-matured) Mackmyra, for this one it’s three years in an ex-bourbon barrel, then three years minus one week in a 30 litre cask made from Swedish oak. The latter is presumably a new cask, and would be expected to provide a lot more to the spirit than the pre-used one.

Nose: Vanilla and toffee. Tropical fruit in teh background, roasted nuts and garrapinyades (“brente mandler”). With water I still get the nuts, but also Four Red Fruits tea and oak.

Palate: Oak, honey, thyme and heather. More oak. Oaky bitterness. A lite liquorice and dark syrup on the finish. Water increases the bitterness, but I also get fruit tea (fruit infused black tea) with atrificial sweetener, especially on the finish.

Comments: Not my cup of tea (almost literally). Not horrible, but too… Well, too much bitterness and the sweetness that is there is not a balance, because it comes across as artificial. And I don’t like fruit infusion teas, so that’s a bit of a non-starter.

When I set out to record the details for this cask, which Mackmyra brought a sample of to Östersund Maltfestival, I got confused. What do they actually mean by “förlagrad” (“pre-matured”)? When the label says that the cask was filled (“fatfyllning”) 30 June 2010 I’m assuming they mean filling of the 30 litre bourboncask which the whisky is then bottled from, but what, exactly, is being filled into this cask in 2010? How old is the spirit and what had it been stored in previously?

A quick search, and I found that Mackmyra provide the answer on their cask offer pages. If you buy a cask from them, one of the spirit varieties you can choose is “förlagrad elegant”, which means that the spirit will first have been matured in a 200 litre ex-bourbon cask (i.e. a bourbon barrel) for three years before it is filled into your 30 litre cask of choice. In other words, it is already whisky by the time it’s filled into the tiny cask, and you would be justified in calling the extra maturation a sort of “finishing”.

In any case, here are my notes for this specimen of Macmyra’s “elegant” (that is: not peated) spirit, matured for three years in a bourbon barrel and then for almost three years more in a 30 litre ex-bourbon cask.

Comments: A very pleasant dram. A little too bitter on the palate, but nice even so.

Palate: Malt, a hint of sulfur, yellow apples. With water the malt turns doughy, and I get strong associations to a “Full Scottish Breakfast” without managing to pinpoint why… White pudding, perhaps? Or haggis?

Comments: Quite my cup of tea. There’d be no point in maturing this, except it results in another product entirely and so why not have the best of both worlds?

Despite some confusion regarding the locations of both Tevsjö and Gammelstilla, we were confident that we could find Mackmyra, having passed this sign the day before: 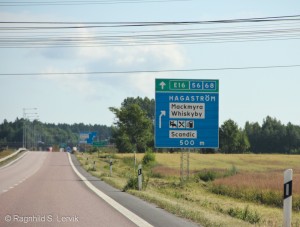 So we took the exit for Hagaström, and passed Mackmyra without noticing it at all… Once we realised we’d gone too far and turned around, it was very easy to spot the distillery, but from the direction we had come Mackmyra Whiskyby was hidden behind some trees.

We had an appointment with Angela D’Orazio, Master Blender at Mackmyra, whom we have both met before. I attended her masterclass at one of the first Oslo Whiskyfestival where she presented Mackmyra from small casks (a long time before even Preludium was released). Since Mackmyra has a strict 15 years and over age restriction on their tours, we had to convince Angela to do two tours, one with each of us adults, while the other waited outside with the kids (passing time picking blueberries, which the woods around Mackmyra had plenty of). Luckily she agreed.

I was first, and we started the tour in the “skogslager” – the wood warehouse – which has been designed to fit into the surroundings with grass on the roof. Skogslageret is Mackmyra’s most recent warehouse, and they are continuously expanding it, adding a new module for every 1000 casks. 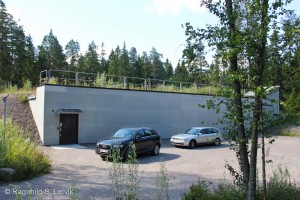 Small casks are rather appealing, I, for one, am always tempted to just grab one and make off with it… 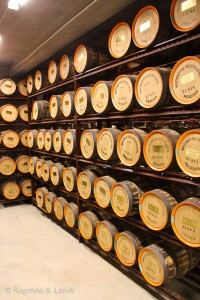 After the warehouse we had a look at the “rökanläggningen” – the “smokery” – which has been built in an old shipping container. That it works is evident when tasting the Mackmyra Svensk Rök, for example. 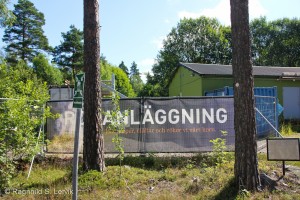 Finally, it was time for the actual distillery, and this was something we’d been looking foreward to. It’s always exciting to see a new (to us) distillery from the inside, but Mackmyra is rather special, being built as a gravitational plant. The most obvious effect of which is that the distillery building is TALL. 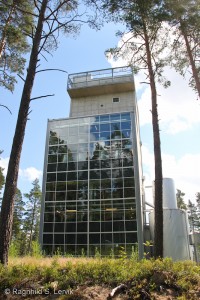 We started the tour by donning grey lab coats and climbing to the top floor. The top floor has a bit of a view. 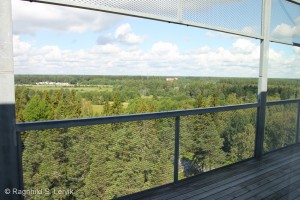 A malt elevator brings the malt to the top of the building, and it is then dropped into the mill, which is the first part of the process that happens inside the skyscraper. 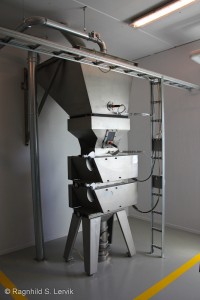 After milling, the grist “falls” one floor to the mashtun, where water is added and worts extracted. The worts run down another floor, to the washbacks, yeast is added and worts ferment into wash. And then the fun begins. Mackmyra have two pretty copper potstills of the traditional type.

Here, or rather on the floor below the platform from where I took the pictures of the stills, we find another thing that is unique for Mackmyra (as far as I know). The old nordic term for “the thing the spirit runs through for visual inspection”, the spirit safe, is “spritklokke” (literally “spirit bell jar”). And spirit bell jars are exactly what we find at Mackmyra. 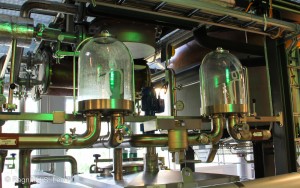 At this point I was sorely tempted to rub my hands together and cackle “Ahahahahaaa” in a mad scientisty way, the lab coat didn’t help at all.

Shortly after our visit I came across an archive image from Romedal brenneri, of their “spritklokke”. It’s available online at Digitalt museum.

Had we been on holiday without children, we’d have booked a dinner and tasting in the restaurant at Mackmyra. As it was we were left to drool a bit at the bar. 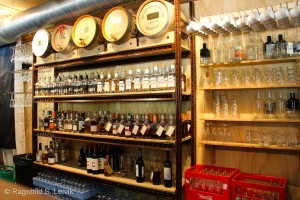 Since I don’t drive I got to have a quick couple of tastes, but the younger elements of our party were getting increasingly restless, so I had to accept that that was all I would get. I’ve since been able to try Mackmyra Midnattsol again in better conditions, but here are my quick impressions of two others:

Mackmyra Moment Malström 46.4% had oak, cold rock and ashes on the nose, and tasted slightly bitter, with some congeners (of the good sort), honey, fruit and ashes.

I would happily have poured a sizeable dram of either of them and hidden myself away in a corner to enjoy it, but had to say nicely thank you for the tour and stuff the family into the car for the next leg of our Tour de Suède (it was our last morning in the Gävle area).

More pictures from Mackmyra in the gallery:

According to Mackmyra’s product information, this has been matured in American and Swedish oak, both ex-bourbon and ex-sherry, and then finished in casks that have held Swedish wine made from birch sap.

Nose: Different. There’s definitely something of sap or resin here. I also get some heather and honey. A little sweet tobacco as well? With water it turns towards throat lozenges, with some mint, ammonium chloride and black pepper.

Palate: Honey on the palate as well, and resin. Vanilla and coriander. More woody with water, but the tobacco from the nose also makes an appearance.

Comments: Quite unique, and very, very good. An interesting nose and a complex, but well-balanced palate. There’s quite a bit of “But is it whisky?” over this, but when the result is this good I’m not sure that I care.

The newmake bottled as Vit hund is of the variety Mackmyra calls “Elegant”, distilled from unpeated malt. 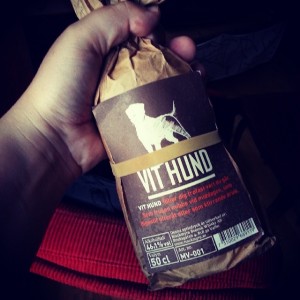 Nose: Sulfur, a touch of apricots, clear malt notes, like a grain store. Almonds and a little fennel. With water I get lemon and a bit of acetone, then honeydew melon and almond essence. Sulfur and congeners throughout.

Palate: Spice, peaches, hint of pineapple. Grainstore as well. A sharp note on the finish. With water there are more spices; cardamum and coriander, as well as baked, mealy apples.

Comments: This is nice enough to beg the question of whether maturing it is really neccessary. On the other hand it’s nice in a very different way than whisky, so perhaps, “Both, please” is the correct response. There is a lot both on the nose and the palate, and it opens beautifully with water. There is newmake roughness, of course, but that is to be expected and personally I rather like it (if you like your whisky smelling of tar I guess you may like sulfur as well, though there will probably be a lot of people who like one or the other and some will like none). Clear malty and grainy notes leave you in no doubt what sort of spirit this is, also a good thing.