Nose: Alcohol. After a while peach and lemon, and quite a bit of vanilla.

Palate: The cask is present, even if I doubt “raspberry” would have been my first thought had I had this blind. I get more of a rhubarb, actually. And citrus. A lot of vannilin, so one suspects relatively new oak. In the background I find raspberry jam.

Comments: This stretches the concept of whisky, really, something it shares with a few other “finishes”. This does not make it a bad product, in fact it is rather nice, but it raises issues with branding.

Arve says it was much more raspberry-like from a newly opened bottle, my sample has had some air. 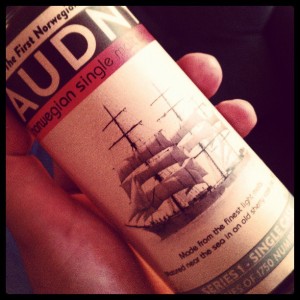 Nose: Vademecum. With a little water it softens into a more normal spicyness with a hint of menthol.

Palate: Vademecum on the palate as well, with underlying malt and some oaky bitterness.

Comments: Needs some time in the glass. First impression is much like with a lot of other non-Scottich whiskies, viz “it’s nice, but is it whisky?”, but with some water and air I’m beginning to think it’s pretty good. Not  “Norvege douze points” good, but a very respectable first attempt.